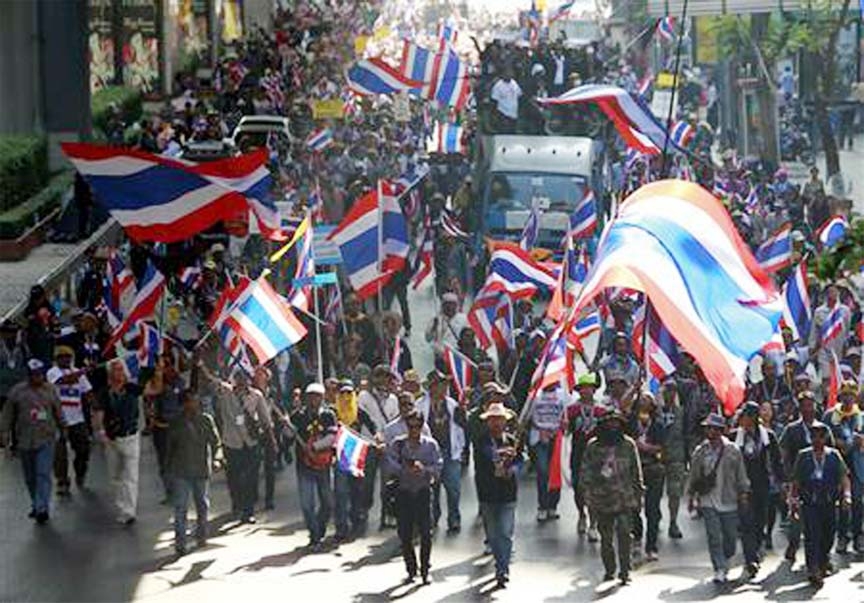 Reuters, Bangkok :
Protesters in Thailand trying to force out the government marched on revenue offices on Thursday, but their numbers appeared to be dwindling and ministers said the movement could be running out of steam.
A state anti-corruption panel is due to give a ruling later in the day on a rice-buying scheme introduced to support farmers, a money-guzzling subsidy program that has been a lightning rod for government critics, and that could give new ammunition to opponents of Prime Minister Yingluck Shinawatra.
The unrest flared in November and escalated this week when demonstrators led by former opposition politician Suthep Thaugsuban occupied main intersections of the capital, Bangkok.
The turmoil is the latest episode in an eight-year conflict that pits Bangkok’s middle class and royalist establishment against the mostly poorer, rural supporters of Yingluck and her brother, former premier Thaksin Shinawatra.
The protesters want to suspend what they say is a fragile democracy destabilized by Thaksin, whom they accuse of nepotism and corruption. They want to eradicate the political influence of his family by altering electoral arrangements in ways they have not spelt out, along with other political reforms.
Thaksin’s rural and working-class support has ensured he or his allies have won every election since 2001 and Yingluck’s Puea Thai Party seems certain to win any vote held under present arrangements.
Around 500 protesters marched from their camp in Lumpini Park to government revenue offices in the area. A handful of protesters went in to talk with officials at each site and some said they wanted to freeze Yingluck’s salary.
However, the number of people camping out overnight at some of the seven big intersections targeted by Suthep’s group appears to have dropped and attempts to block traffic along other roads have become half-hearted.
“People see that the requests of the protesters are impossible under the (law) and constitution,” Yingluck told Reuters. “That’s why the number of supporters is getting less.” She was speaking as she left her temporary offices at a Ministry of Defence facility in northern Bangkok, heading for a “reform forum” at a nearby air force base.
“That’s the best way for Thailand, to have a dialogue,” she said. “Whatever we don’t agree on (and) the conflicts of the past can be solved under the reform forum.”
Army spokesman Winthai Suwaree said some troops had been deployed from Wednesday, patrolling protest areas or helping at medical tents.
The security forces have largely kept out of sight since the blockades began this week, with the government keen to avoid any confrontation with the protesters.
Many ministries and state agencies have been closed for the same reason, but the government says operations and services are being maintained by civil servants working at home or from back-up offices.
The protesters have set up one camp at a huge government administrative complex in the north of the capital.
Foreign Minister Surapong Tovichakchaikul said the issue of passports had been affected. 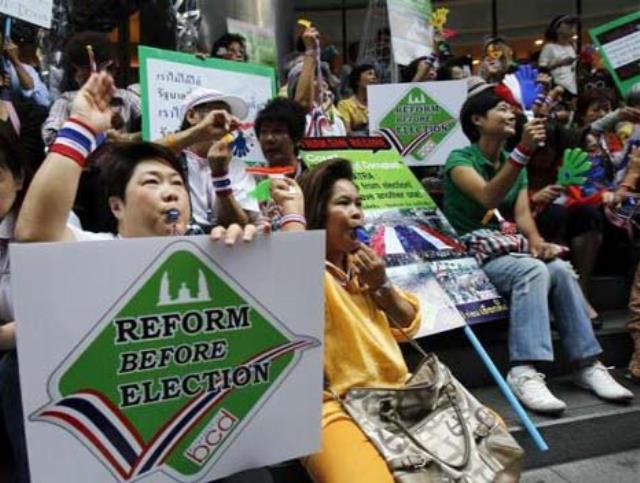 Anti-government protesters blow whistles and hold placards during a rally at Silom road in central Bangkok.

GDP growth may slow down to 5.7pc