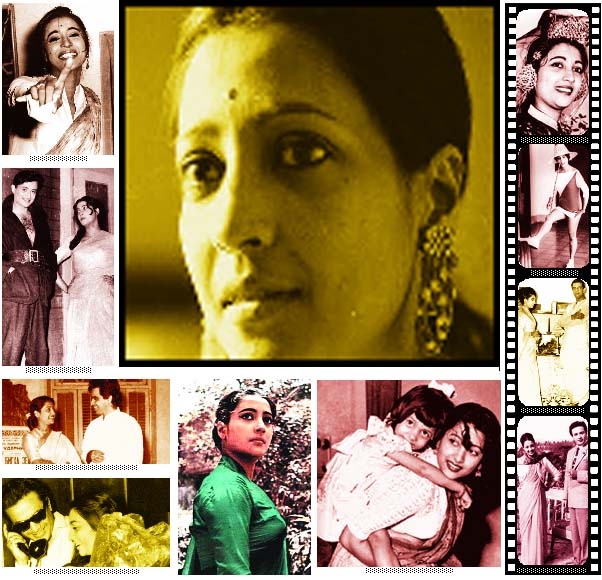 Sheikh Arif Bulbon :Six decades ago, long before Aishwarya Rai and Kareena Kapoor set out to prove that married actresses could be celluloid heroines, a 21-year-old actress was single-handedly leading the charge in Bengal. By the time she had her first big hit in 1953’s Sharey Chuattor opposite Uttam Kumar, the man who was to be one-half of Bengali cinema’s most revered screen couple with her, Suchitra Sen had already been married six years and was the mother of five-year-old Moon Moon. Over the next 20 years, Uttam-Suchitra became part of cinematic legend and Suchitra Sen one of Bengal’s brightest stars. Capturing the public’s imagination for three decades through her ethereal beauty and intense celluloid performance, Suchitra Sen symbolised the golden age of Bengali cinema with memorable films like Agnipariksha, Devdas and Saat Paake Bandha.The doe-eyed beauty turned a recluse after bidding adieu to the world of films in the late seventies and was often compared to Hollywood icon Greta Garbo, who shunned public contact.No other heroine in Bengal, since Kanan Devi, caught the public imagination as Suchitra Sen did. In an era of black and white movies, her intense performances catapulted her to stardom.Such was the popularity of the Suchitra Sen that during Durga Puja, idols of Lakshmi and Saraswati were known to have been modelled on her face.Suchitra Sen died on January 17 at the age of 83 after suffering a heart attack. Rama Dasgupta (Suchitra’s original name) was born in Pabna on April 16, 1931 to a schoolteacher father and homemaker mother. She was 16 when she married Dibanath Sen, scion of a wealthy business family in Kolkata, in 1947. The couple had a daughter named Moon Moon in 1948 and remained married, amid rumours of trouble, all through Suchitra Sen’s meteoric rise to stardom till Dibanath Sen’s death in the ‘70s. In 1952, Rama Sen, now called Suchitra, faced the arc-lights for the first time in the ill-fated Shesh Kothay, which was never released. Just the next year, however, Sharey Chuattor made her a star and launched the canon of Uttam-Suchitra romances. In 1955, the young Suchitra Sen starred as Paro in her first Hindi film, Bimal Roy’s adaptation of Bengali classic Devdas, opposite Dilip Kumar and Vyjayanthimala. She appeared, with varying degrees of success in other Hindi films including Musafir (1957), Mamta (1966) and Aandhi (1975) in which she played a politician, reportedly a fictionalised version of Indira Gandhi. She was nominated for the Filmfare Best Actress award for both Mamta and Aandhi. Back home in Bengal, Suchitra Sen was incomparable. With Uttam Kumar, she made movie magic in films like Sagarika (1956), Harano Sur (1957) and Saptapadi (1961). She was also feted for her dramatic performances in films like Dweep Jele Jai (1959) where she played a psychiatric nurse who develops a relationship with a male patient as part of his therapy and Uttar Falguni (1963) as the courtesan Pannabai and her lawyer daughter Suporna. In 1963, Suchitra Sen became the first Indian actress to win an international award, receiving the Silver Prize for Best Actress at the Moscow Film Festival for Saptapadi. As the ‘70s wound to a close, so did Suchitra Sen’s career. She refused a film offer from Raj Kapoor and was unable to find dates for a film directed by Satyajit Ray. In 1978, she made her last celluloid outing in Pranoy Pasha opposite Soumitro Chatterjee, retiring not just from the big screen but also from public life itself. So reclusive did the actress become that she was dubbed India’s Greta Garbo, even refusing the Dadasaheb Phalke Award in 2005 because it meant travelling to New Delhi. Over the years, just a handful of people were admitted into her South Kolkata home apart from daughter Moon Moon and grand-daughters Raima and Riya Sen. In 2012, Suchitra Sen received the Banga Bibhushan award from the government of West Bengal, India.She formed an unbeatable romantic pair with Bengali cinema legend Uttam Kumar. The duo gave a string of memorable hits such as Harano Sur (1957), Agnipariksha (1954), Saptapadi (1961), Grihadaha (1967), Indrani (1958), Sagarika (1956), Bipasha (1962), Komol Lata (1969), Alo Amar Alo (1972), Har Mana Har (1972) and Priyo Bandhobi (1975).Suchitra Sen acted in 52 Bengali and seven Hindi films.Champakali, with Bharat Bhushan, Sarhhaad and Bombai Ka Babu with Dev Anand and Mamta were some of her other notable Hindi films.A follower of the Ramakrishna Mission order, Suchitra Sen spent her retired life in meditation and prayer. In 1989, when Bharat Maharaj of the mission passed away, she was seen publicly walking all the way to the crematorium from Belur Math near Kolkata.Her daughter Moon Moon, though a well-known Bengali actress, could never overcome the large shadow that her mother’s beauty and acting prowess cast. Her grand-daughters Riya and Raima have also featured in some Bollywood flicks.She was cast opposite matinee idol Uttam Kumar in 30 films from 1953 to 1975.

Chittagong Bureau : Police recovered another body near airport road in Chittagong on Tuesday. So far three dead bodies of people hacked or suffocated to death were found in a span of two days in the port city Chittagong.EPZ Police Station SI Rajesh Borua said, a body of a man was found in a gutter near Ruby Cement Factory on the Airport Road on Tuesday.Earlier in the day, a headless corpse of another man was found on a hill surrounding...
January 16, 2014