Russel back in winning track 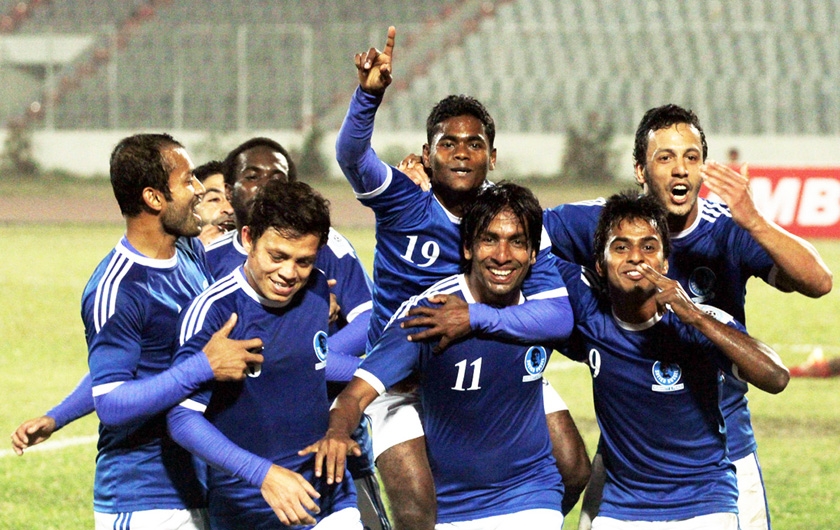 Defending champion Sheikh Russel Krira Chaka bounced back to the winning track in the Bangladesh Premier Football League beating Soccer Club Feni by 2-0 goals held on Thursday at the Bangabandhu National Stadium.
Sheikh Russel were very close to score in the 26th minutes, but Moroccan forward Youness Roux’s shot from the box provided by Mithun Chowdhury was saved by Soccer goalie Masud Ahmed Uzzal who dived to the left.
Forward Youness squandered another chance for Russel to take the lead in the 40th minutes as his shot went over the cross having one on one situation with against goalie Uzzal on a pass from forward Mithun Chowdhury.
However, winger Shakil Ahmed broke the deadlock in the 78th minutes with a header Forward Mithun provided a cross to Shakil who headed home (1-0).
Moroccan forward Youness Roux sealed the victory one minute before the stipulated time. He tapped a ball into the net on a cutback off wily forward Mithun Chowdhury. (2-0).
After this victory Russel earned 9 points from 4 matches while Soccer remained with their previous collection one point from the same number of matches.

AFP, Beijing :China began to implement the loosening of its controversial one-child policy on Friday when a province announced it has made it legal for couples to have two children if one parent is an only child.Legislators in Zhejiang in eastern China on Monday passed a revision to the local rules on Monday making the change, the provincial legislature said in a statement.China’s National Health and Family Planning Commission confirmed to AFP that Zhejiang was the first province in the...
January 19, 2014