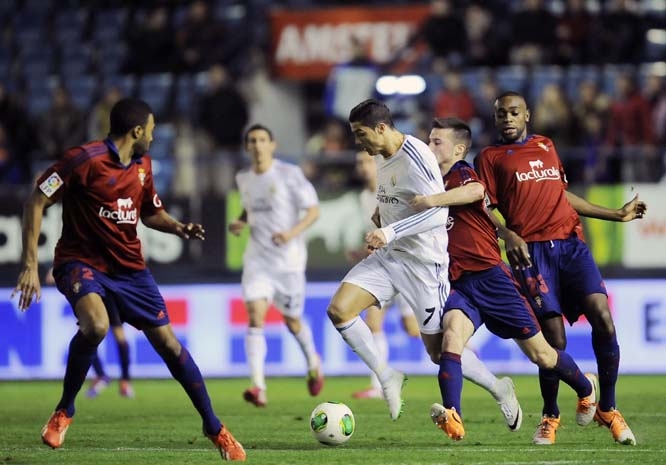 Cristiano Ronaldo celebrated his Ballon d’Or triumph by scoring from one of his trademark free kicks as Real Madrid beat Osasuna 2-0 on Wednesday to reach the Copa del Rey quarterfinals on Wednesday.
Ronaldo smashed a swerving shot from 25 meters around the defensive wall and straight at goalie Andres Fernandez. The keeper tried to punch it out but ended up sending it down off the ground and between his legs into the net.
Ronaldo’s 22nd-minute strike effectively sealed the contest, with Osasuna having lost the first leg 2-0.
Osasuna forced Madrid goalkeeper Iker Casillas into a number of saves to close the half after having rarely threatened before Ronaldo’s opener.
Angel Di Maria capped a quick counter in the 56th by sweeping home Jese’s cross following a long run from the halfway line, securing a 4-0 aggregate victory at El Sadar Stadium.
“The team looks better with every game,” Jese said.
Madrid defender Fabio Coentrao was shown a second yellow card in the 85th and Madrid finished with nine players after substitute Alvaro Morata came off minutes later with his left eye swollen shut following a collision earlier on.
Ronaldo’s 30th goal in all competitions this season – and 37th when counting those scored for Portugal – further justified the forward’s pick as world player of the year ahead of Lionel Messi and Franck Ribery.
Ronaldo made way for Gareth Bale in the second half but the world’s most expensive player made little impact.
Madrid will next play Espanyol, which eliminated second-tier Alcorcon 4-3 following a 4-2 home win on the night.
Portuguese forward Pizzi curled home an 86th goal to ensure Espanyol’s progress at the expense of Alcorcon, which famously knocked Madrid out of the competition in 2009.
A rematch with Madrid had looked on the cards after Alcorcon midfielder Javier Peral made it 2-2 in the 80th minute, with his side holding a 1-0 lead from the home leg.
Victor Alvarez put Espanyol 3-2 ahead minutes later but the second division side was still through thanks to the away-goals rule – until Pizzi’s curler from the left side.
Also, Mikel Rico scored two goals to send Athletic Bilbao into the last eight with a 2-0 victory against last-place Real Betis.
Bilbao, trailing 1-0 after the first leg in Seville, leveled the contest on aggregate in the 23rd minute when Rico produced a magnificent touch to gather Ander Iraiola’s lofted pass into the area on the run and score with a left-footed shot.

BBC Online : A US ice-breaker is to help two ships that are stuck in thick ice in Antarctica following a rescue mission. The Polar Star has been asked to cut a path through the ice in order to free the Xue Long and the Akademik Shokalskiy, the US Coast Guard said. The Chinese boat, Xue Long, became ice-bound after helping to rescue 52 passengers stranded on Akademik Shokalskiy on Thursday. The Russian research vessel has been trapped since 24...
January 8, 2014

Only party men get jobs at Jn University