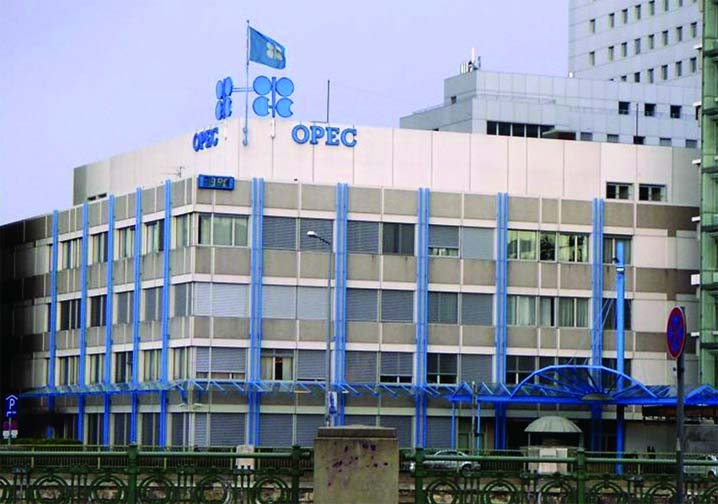 Xinhua, Vienna :
The world oil market share of OPEC (Organization of the Petroleum Exporting Countries) declined while non-OPEC oil supply continues growing, the exporter group said in its monthly report Thursday.
The monthly report from the Vienna based oil exporter group revised its forecast of the non-OPEC oil supply growth up to 1.27 mb/d (million barrels per day), by 70 tb/d, due to the growing supply including U.S., Canada and Brazil in 2014, while OPEC tends to pump less oil recently.
The report said the exporter group’s oil output in December hit 29.44 mb/d, a decline of 20 tb/d compared with the previous month, which led to the decline of the OPEC’s market share.
“The share of OPEC crude oil in total global production declined slightly to 32.6% in December compared with the previous month,” the report noted.
In 2014, the demand of OPEC crude is predicted at 29.6 mb/d, a decline of close to 0.4 mb/d from the previous year, unchanged from the forecast of last month while the growth World demand for 2014 is revised to be around1.05 mb/d, up by a marginal 10 tb/d, to reach 90.91 mb/d. Enditem
OPEC seems to lower its oil output below the market demand level of its crude which is forecast at 29.6 mb/d, while the world market demanding and the non-OPEC supply keeps growing.
In this year, Libya’s output has somehow recovered and Iran’s agreement with Western powers over its atomic programme could raise the prospect of recovery of oil exports.
In the background of the rise of the non-OPEC oil output, the world market share of the OPEC might continue to drop if the group keeps a relative low output in future days.
OPEC’s report, which account for a third of the world’s oil market, seems to be optimistic to the world economic, seeing faster growth in this year of 3.5 percent, up from 2.9 percent in 2013.

The government has appointed Mollah Wahiduzzaman as chairman of Privatization Commission with status of state minister.Earlier, he served as secretary of the Food Ministry and Prime Minister’s office, an official release said. Wahiduzzaman is expected to take new charge today....
January 19, 2014

SEU organises seminar on Drop Out

A Milad Mahfil on the occasion of Eid-e-Miladunnabi was held in Chittagong yesterday.