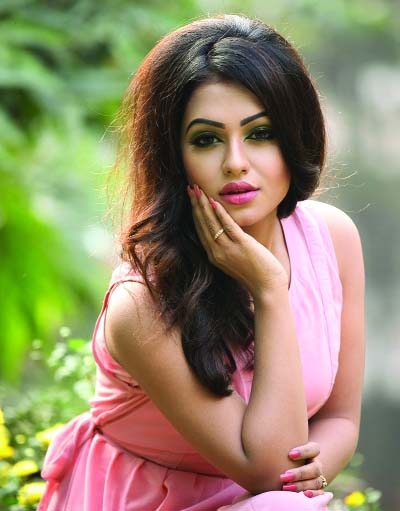 Entertainment Report :Within very short time Nushrat Faria has not only become a popular model in the field of television commercial (TVC) but also she has already received a positive acceptance as a host to the viewers. Faria’s glamorous presence on the screen in TVC and exceptional programme presentation has already impressed most of the viewers.This popular model celebrity is going to appear as a host in a new live show.Nushrat Faria is going to perform as a host in private satellite channel, RTV’s new live show titled ‘Late Night Coffee.’ To find out the problems of the young generation, and to give recommendations for them are the key issue of this one-hour long programme, which first episode will go on air on January 25.While talking in this regard Nushrat Faria told this correspondent, “I always feel comfortable to host any programme. For this reason, to perform as host in another live show will be joyful matter for me. I shall try my level best to host the new live show in exceptional way from my point of view.”Though she is performing as host in TV programme, Nushrat Faria has no interest to perform either in TV play or movie, she said.It may be mentioned that Nushrat Faria firstly performed as a model in a TVC of a mobile company. Recently Faria’s performances in two TVCs – ‘Fair & Lovely’ and ‘Centre Fresh,’ directed by Adnan Al Rajib, were highly appreciated to all. Now Nushrat Faria is performing as host in SA TV’s live show titled ‘SA Live Studio,’ ATN Bangla’s ‘Trend,’ GTV’s ‘Lux World of Glamour’ and on Radio Foorti’s every night of Monday, Tuesday and Wednesday from 12:00am to 2:00am in popular show titled ‘Night Shift with Nushrat Faria.’

Information Minister Hasanul HaqInu said here that BNP Chairperson Begum Khaleda Zia has to stop violence, anarchy and severe relations with militancy and Jamaat, if she wanted dialogue.He made the remarks in his ministry’s conference room on Thursday a day after Begum Zia briefed the media.The minister came down heavily on Khaleda Zia as she blamed the government for carrying out attacks on the minority communities. Her statement is false and baseless, he said. “It was unfortunate that Begum Zia...
January 17, 2014