Nothing to gain by using the cane

Sir Frank Peters :December 13 is Pupil’s Liberation Day- a memorable and auspicious occasion for many Bangladeshi school pupils, regrettably not all.It was on this date in 2011 that eminent Bangladesh High Court justices Md. Imman Ali and Sheikh Hassan Arif outlawed the barbaric practice of corporal punishment in schools declaring it:”cruel, inhuman and degrading treatment and a clear violation of a child’s fundamental right to life, liberty and freedom”.While some children have reason to celebrate their “Liberation Day” from the horrors of cruelty in the classrooms and attend school without tears, without fears, many of their young comrades are still not so lucky.During the past three years there have been countless reports published in newspapers and appeals made for ‘teachers’ to abandon their despicable practice of beating defenceless children. There’s been feisty discussions on TV and Radio talk shows, memos from the Education Minister Nurul Islam Nahid MP and Education Secretary Dr. Kamal Naser Chowdhury, all informing and reminding headmaster and teachers alike they are not permitted by law to hit any child.The message was clear: “There’s nothing to gain by using the cane” During this period there’s also been a number of horrifying news reports published that link corporal punishment to cancer and life-long disabilities, but some ‘teachers’ just don’t seem to care. Some, it would appear, view every child entrusted into their care to be there for their masochistic pleasure to be slapped, kicked, beaten, mentally and physically mistreated as they so please. And this they call discipline! Discipline is the word they give to their own shortcomings. It covers a multitude of evil sins and to the ignorant parents of the children in the villages, they believe and trust the ‘teachers’ to be acting in the better interest of their child. After all, the ‘teacher’ is educated and would be knowledgeable on such matters, correct? – Ha! How wrong can they be?In many cases the ‘teacher’ knows only a little bit more than those in his charge and succeeded in winning the brown envelope game to get the job.Teachers they’re not, and highly unlikely they will ever become one, no matter how many years they’ve already escaped detection. While I can sympathize with the Bangladesh education system in desperate need of good professional teachers – which will take decades to sort out – there is no excuse for corporal punishment from the consummate incompetent.Qualified as teachers, they might not be, but they have a duty to Allah, the nation and the code of common decency that clearly states if they can’t help, then they shouldn’t hinder the development of the child, at least.There’s an enormous violence undercurrent in Bangladesh, you will have noticed. We see its uglyface during hartals, especially. We read about the mindless beatings and killings in the blood-filled streets and our TV screen are crammed with public transport, shops, houses, even schools ablaze and shameless damage to private and public property. It is as if causing willful damage and terrorizing innocent people is a perk of the process and fun to be had by the mindless participants and most probably it is.Such deplorable scenes are likely to continue long into the future, if the problem isn’t addressed soon. In some schools a fresh batch of terrorists are being prepared right now.Any school that engages in the use of corporal punishment is a breeding ground for terrorists. Some of the ‘teachers’ who ‘teach’ at these schools are themselves terrorists. The messages they deliver via the cane, clenched fists and open hands are messages of terrorism, oppression and fear. While the children are perhaps a decade or two away from making throwing their first bomb into an over-crowded public bus; corporal punishment teaches them that violence is good… that violence is the solution to all problems. What other reason would there be for ‘teachers’ to force their brawny muscles on little children with sticks, fists, leather belts, bamboo canes and kick, pinch, pull their ears, their hair and treat them so unkindly, if it weren’t good for them?To save the nation from more of this destruction, mindless violence and repulsive unsocial behaviour the problem needs to be addressed at its source… in the schools. There’s not a lot that can be immediately done for those who already graduated from the Bangla Bhai School of Social Disturbances and Public Mayhem, but at least a more pleasant future can be secured for present day pupils.It’s as easy to teach ‘right’ as it is to teach ‘wrong’… to teach ‘love’ as it is to teach ‘hate’… to teach ‘peace’ as it is to teach ‘aggression’. It makes sense that we should only teach what benefits the individual, society and nation… ‘Love, Peace, Harmony and Goodwill to all’.The rot must stop. Hartals must cease to be the meeting places and playing fields of lawbreakers, thugs, terrorists, goons, loonies, miscreants, the misled and disillusioned (paid and unpaid).The New Year resolution of every parent in Bangladesh should be to know what’s going on in their child’s school, to write or visit, and to insist that no corporal punishment is given. That course of action is only for parents who love and want to protect their children and country, of course.(Sir Frank Peters is a human rights advocate, a former newspaper publisher and editor, an award-winning writer and a dedicated foreign friend of Bangladesh. 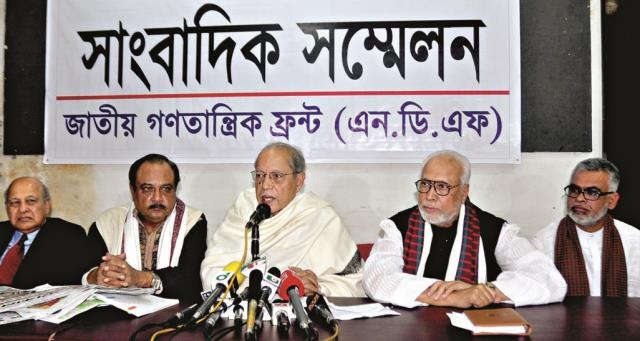 GDP growth may slow down to 5.7pc