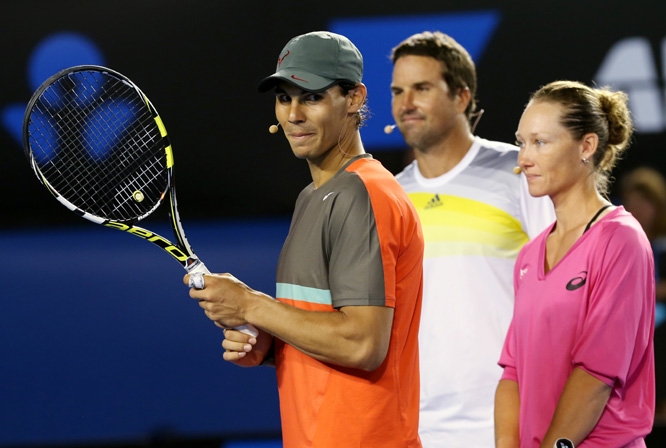 Rafael Nadal admitted Saturday he was facing a tricky start to the Australian Open after being drawn against home favourite Bernard Tomic, but said he was up for the challenge.
Tomic has been in good form leading into the year’s opening Grand Slam, making the final of the Sydney International, and poses an unwanted early headache for the world number one.
Nadal, who opened his season by winning the Qatar Open final against Gael Monfils, knows he will have his hands full with Tomic, 21, backed by a traditionally vocal crowd.
Nadal’s only career meeting against Tomic was in the Melbourne third round in 2011, when the young Australian showed class and potential before going out 6-2, 7-5, 6-3.
“It is not the best round I know to start a Grand Slam, playing against a player who is local and who is young, who played great in the past here, and who is playing well, ” said the Spaniard.
“It’s a tough start. But what I thought is just I need to be ready and just practise with great tactics every day, try to do the right things in every moment to arrive in the first round competitive. That’s the only way. ”
Despite the early roadblock Nadal, who missed Melbourne last year because of his troublesome injured knees, is feeling fit and confident he can prevail against the youngster, having come through a physical test against Monfils in Doha.
Nadal, coached by his uncle, Toni Nadal, underwent a new but undisclosed form of treatment on his knees in the off-season, which appears to have paid dividends.
“Physically, it is not a problem, the important thing is play well, ” he said, when asked how he was feeling heading into the Australian Open, where his target is dethroning arch-rival and defending champion Noval Djokovic.
“If you get an injury, then it is a problem. Sometimes in the past I felt right and then I got injured in the tournament.
“I feel without problems, but you never know what’s going to happen. Hopefully I’ll be healthy for the whole year. That’s the most important thing for me. ”
The Melbourne Park courts are traditionally fast and bouncy, characteristics which usually suit Nadal, but he is wary of the likes of Djokovic and Roger Federer, who have tended to play better in Australia.
Nadal has only won the Australian Open once, in 2009, while Djokovic and Federer are both four-time champions.
“I was able to play well in fast conditions in the past. But it is true that I need to play my best to really have chances to be very competitive here against everybody, because the conditions are a little bit faster than usual, ” he said.

Interpretation of our sacred Constitution

Skilled manpower must for dev

Arms snatched from ansar in Narsingdi