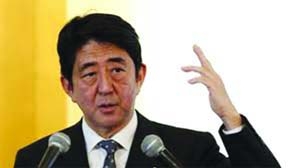 AFP, Tokyo :
A Japanese government report Friday said the economy was “recovering”, its first use of the word since the 2008 global financial crisis, as Prime Minister Shinzo Abe works to revive years of tepid growth.
Tokyo’s monthly checkup on the world’s third-largest economy used some of its most upbeat language in years as it pointed to a pick-up in consumer and capital spending.
“The Japanese economy is recovering at a moderate pace,” it said.
“Concerning short-term prospects, the economy is expected to be on a recovery trend as household income and business investment increase, while exports move toward picking up,” it added.
The latest report is also the most rosy rating on the once-powerhouse economy since its January 2006 paper.
It comes about a month after Abe’s one-year anniversary as premier following landslide national elections which he won largely on a pledge to restore Japan’s economic glory.
Abe’s policy blitz, dubbed Abenomics, helped to sharply weaken the yen which is good news for exporters as it makes them more competitive overseas and inflates the value of repatriated profits.
The premier has vowed to conquer years of deflation which weighed on consumer spending and, in turn, hurt producers, holding back new investment by Japan Inc.
Convincing firms to hike stagnant wages so consumers will spend more is a cornerstone of Abe’s blueprint to fix the economy.
November data showed prices rising 1.2 percent, their fastest pace in five years and moving closer to the Bank of Japan’s ambitious 2.0 percent inflation target.
Analysts have cast doubt on the BoJ’s two-year timeline to meet that goal, as they warn that a sales tax hike in April- seen as crucial to shrinking Japan’s huge national debt-would derail a recovery.
Tokyo’s report Friday cautioned over the rate hike to 8.0 percent from 5.0 percent, saying that “a last-minute rise in (consumer) demand before a consumption tax increase and subsequent negative reaction are expected”.
It also warned that an unsteady recovery overseas was a “downside risk” for Japan’s economy.
Speculation has been rising that the BoJ, which holds a policy meeting next week, will launch further easing measures to counter any slowdown, after unleashing an unprecedented stimulus campaign last April.
“Barring some major economic or market shock, the Bank of Japan is likely to wait until the second half of this year before announcing any further monetary stimulus,” London-based Capital Economics said this week.
“This would allow the board to gauge how the economy has weathered this April’s consumption tax hike,” it added.

S.A Shofiee, Sylhet :Some local influentials are lifting sand mindlessly from the Surma River in Sadar and Dakshin Surma upazilas under Sylhet district defying restriction by the authorities concerned.Illegal sand lifting from the river is going on unabated, leaving the bridges and cropland along the river at risk.As a result, the concrete blocks of the local embankment are being displaced everyday.The embankment has also been damaged at several points as sand-laden tractors are frequently moving along the bank.According to sources,...
January 12, 2014