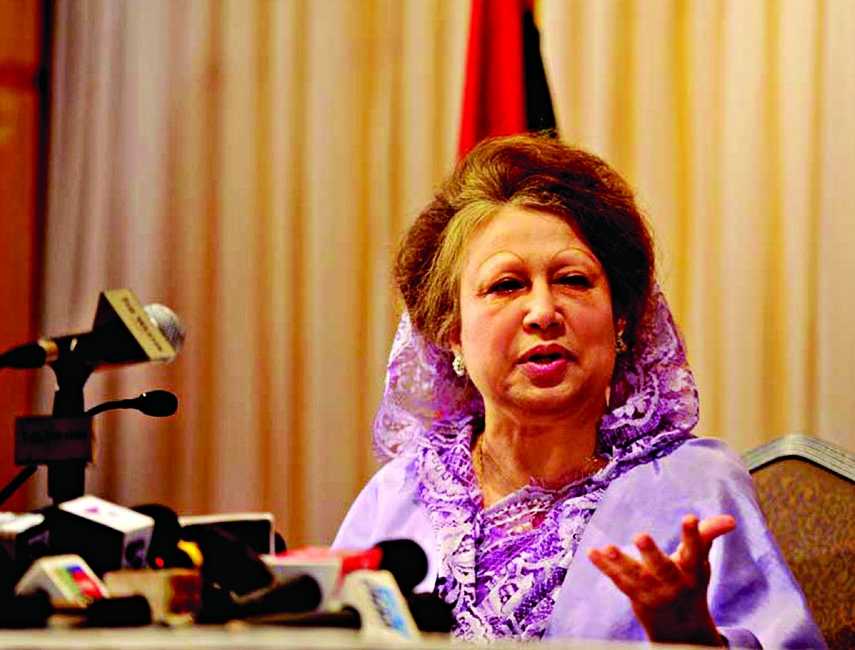 BNP chairperson Begum Khaleda Zia again called for fresh dialogue with the government, with request to take initiative in order to resolve the current political impasse and install a democratic government.
She made the call at a press conference at a city hotel on Wednesday. Ten days after the January 5 polls, which BNP-led 18-party alliance boycotted, and three days after the formation of new government, Khaleda Zia met the press. Senior leaders of the BNP and the 18-party alliance were present.
Prior to the start of the press conference, a 45-minute documentary was screened on polls boycotted by people.
Side by side with the effort of holding talks with the government, Khaleda Zia said that their movement would also continue until the demands were met. She announced fresh programme for continuing the movement.
Accordingly, the BNP-led 18-party alliance will hold rallies and processions across the country on January 20 to thank the people for boycotting the January 5 ‘one-sided’ Parliamentary polls. As part of the programme, a rally will be held at Suhrawardy Udyan in the city when the alliance will stage countrywide demonstrations with black flags on January 29, the day the 10th Parliament will hold its first session.
Besides, BNP and its allies will celebrate the birthday of BNP’s founder and late President Ziaur Rahman on January 18 through holding discussions across the country. A discussion will be held at the National Press Club in the city.
Khaleda Zia and senior leaders of her party and the alliance partners will also visit some districts in an effort to gear up their movement against the ‘illegal’ and ‘dangerous’ government.
“This is an illegal government which doesn’t have any responsibility to people. It is very dangerous to allow such a government to prolong,” Khaleda Zia said. She thanked the countrymen for rejecting the ‘farcical’ election and urged them to join the 18-party’s programmes. She said that Bangladesh has been stripped of democracy and that it must be restored through a movement.
She also said that the January 5 election had proved that the 18-party’s demand for a non-party government has had been justified. “There is no second option than an election with the participation of all under a non-party caretaker government. Otherwise, it is not possible to restore peace and stability in the country. So, we ask the government to take an initiative in this regard,” she said.
Khaleda Zia demanded release of all the political leaders and activists and withdrawal of the false cases against them, and reopening of the closed political offices for creating an environment for dialogue.
The former premier said that her party will formulate a permanent framework of power transfer, if voted to power.
In reply to a remark of Prime Minister Sheikh Hasina that BNP has lost all the hopes, she said, “We didn’t lost any hope as we are with people. Rather it is Awami League which has lost the hope being alienated from people.”
She claimed that no one went to the polling centres in the January 5 poll. Only 5 percent voters exercised their franchises which the government showed as 40 percent, she added.
Replying a question about cutting ties with Jammat, the BNP chief said that Jamaat is a legal political party. Both the Awami League and the Jatiya Party did politics with the party.

Take over by sisi now certain

Reuters, Cairo :Egypt’s new constitution was overwhelmingly approved in a referendum, state media reported on Thursday, an expected victory that nudges army chief General Abdel Fattah al-Sisi ever closer to a bid for the presidency.The vote advances a transition plan the army unveiled after deposing Islamist president Mohamed Mursi last July. The next step is expected to be a presidential election for which Sisi, 59, appears the only serious candidate.Some 90 percent of the people who voted approved the constitution,...
January 17, 2014