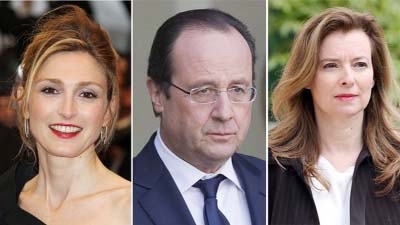 BBC Online :
The French gossip magazine Closer has published claims President Francois Hollande has been having an affair with actress Julie Gayet for two years.
The magazine also printed more details of alleged romance, which it says began during the 2012 presidential race. Gayet has announced she is suing Closer for breach of privacy.
Hollande’s official partner, Valerie Trierweiler, remains in hospital, where she was admitted after learning of the alleged affair a week ago.
In its latest revelations, Closer said the French president used a second apartment in the west of Paris to meet the 41-year-old actress.
It is claimed the pair snatched weekends together in the south of France, and that Hollande made excuses to avoid a holiday in Greece last year with Trierweiler, so he could travel instead to his Correze constituency with Gayet.
The magazine said the president and Gayet had been having a “turbulent romance” for two years – during and after Hollande’s election campaign.
Gayet is seeking 50,000 euros (£41,000; $68,000) in damages and 4,000 euros in legal costs from the magazine.
If she wins, Closer will have to publish the legal verdict on its cover page, AFP reports.
Hollande decided not to take legal action after first threatening to.
The photos have plunged the presidency into crisis.
Trierweiler – seemingly still keen to defend Hollande’s character – is said to have defended him following reports he had not visited her in hospital.
She phoned a journalist on Thursday to explain it was her doctors who had asked Hollande not to attend, says the BBC’s Christian Fraser in Paris.
She said she is still too weak to stand – and that the president has sent flowers and chocolates in his absence, our correspondent adds. In response to the reports, a source at the Elysee Palace said Hollande was “not unhappy” about the hospital forbidding him to visit.
Meanwhile, French magazine Le Point has quoted a friend of Trierweiler saying she had not tried to commit suicide but had taken “one pill too many”. Hollande, 59, told reporters on Tuesday he was experiencing a “difficult moment” in his private life but refused to answer questions over the report in Closer, saying “private matters should be dealt with privately”.
Nor would he clarify whether Trierweiler, 48, was still first lady before a February trip to the US.
Closer published a seven-page report on the alleged affair, which Hollande has not denied, last Friday.
Photos show a man in a crash helmet on a moped, said to be Hollande, visiting an apartment building near the Elysee Palace. Gayet is shown at the building in a separate photo.

Reuters, Bangkok Protesters trying to topple Thailand’s prime minister marched in Bangkok on Tuesday to drum up support for their plans to bring the capital to a halt next week by blockading major roads and preventing the government from functioning. Caretaker Prime Minister Yingluck Shinawatra has called an election for February 2 but the protesters, aware she would probably win on the back of support in the rural north and northeast, want her to step down and be replaced by...
January 8, 2014

Abdul Hai Sarker, Chairman of the Board of Directors of Dhaka Bank Limited inaugurating Annual Managers’ Conference 2014 of the bank at a city hotel on Saturday.

SEU organises seminar on Drop Out