UNB, Dhaka :
Prime Minister Sheikh Hasina on Friday expressed profound shock at the death legendry Bengali actress Suchitra Sen.
In a condolence message she said the great actress will ever be remembered by the Bangalees across the world.
The Prime Minister said Suchitra Sen, Greta Garbo of Bengali movies, is one of the most favourite actresses, who she admired most.
“Bengali people have lost a distinctive figure of
classical Bengali daughter, wife and caring mother at her death,” she said.
The Prime Minister said, Suchitra Sen, who in her career mainly focused on the regions of Bengal and Bangladesh, will remain ever remembered as an inspiration for making ameliorative cinemas on Bengali literature and culture.
Hasina said, Suchitra Sen will remain as the light house of the Bengali movies in the coming days.
After fighting for life for more than three weeks, Suichtra Sen breathed her last Friday morning at a Kolkata hospital at the age 83, sending her millions of admirers to immense grief.
Known as the Greta Garbo of India for leading a reclusive life after she left films, Sen was an iconic star of regional Bengali cinema.
Sen teamed up with Bengali star Uttam Kumar to form a popular pair that delivered a series of hits in Bengali cinema for over two decades.
But she quit films in 1978 and led a hermit-like existence, reportedly refusing to meet people outside her own family. She had not been seen in public or photographed in the past three decades. 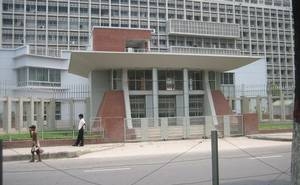