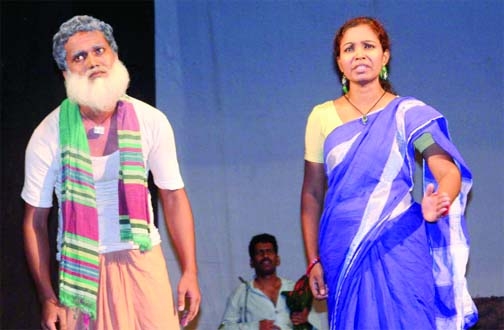 Popular theatre troupe Drishtipat Natya Sangsad is going to stage a show of its 117th production, ‘Nagor Alir Kichchha’ at the Experimental Theatre Hall of Bangladesh Shilpakala Academy in the city’s Segunbagicha area on January 17.
‘Nagor Alir Kichchha’ is a satirical play, which portrays the vivid picture of river erosion victims in the city as well as makes fun on the country’s so-called security system.
Written and directed by MA Salam, the play opens with Nagor Ali, a young man of 30, who loses his homestead to the mighty Padma, flocks to the capital with his maternal uncle, Hasan Chowkidar, to make both ends meet.
As the mighty Padma devoured their homesteads and farmland, they become impoverished overnight and find their fate in a city slum.
On their arrival in the capital, the experience that Nagor Ali gets is the central concept of the play.
Through humorous incidents, Nagor Ali and his uncle make satires on various aspects of urban lives.

Suppression of fact violates everything

High Court Division(Special Original Jurisdiction) Md Ashfaqul Islam JMd Ashfaqul Kamal JJanata Insurance Company Ltd ….. Petitioner vs Commissioner, Customs, Excise and VAT, Dhaka and others…………..…….. …. RespondentsJudgment June 13th, 2013.Value Added Tax Act (XXII of 1991) Sections 37, 51(1) and 56 Suppression of fact-The suppression of fact is a heinous, detestable act, which cuts the very root of any claim made in any discipline, far less to say before a Constitutional Court. Therefore, caution goes without any controversy that...
January 18, 2014