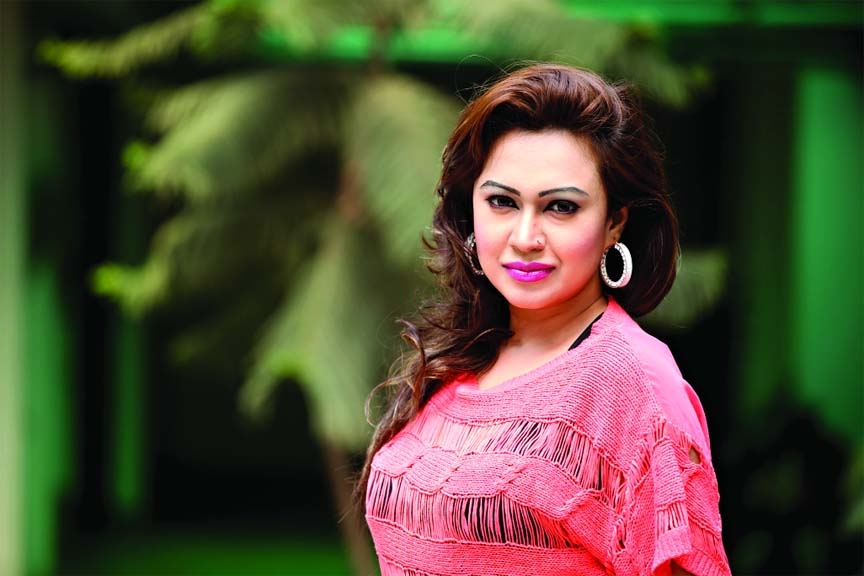 Entertainment Report :Though she started her career as a Lux star in media, Bipasha Kabir, hailed from Noakhali, is now engaged with acting in the big screen. Studying Civil Engineering at the University of Asia Pacific Bipasha Kabir has become familiar to all as an ‘item girl’ in the film industry.She started her career as an ‘item girl’ in Shahin-Sumon directed movie Bhalobashar Rong. Later she was appeared in same role in Montazur Rahman Akbar directed movie Tobuo Bhalobashi, Shahin-Sumon directed Anyorokom Bhalobasha, Raju Chowdhury directed Romeo 2013, Zakir Hossain Raju’s Er Beshi Bhalobasha Jaina, Shahin-Sumon directed movie Jotil Prem, Bodiul Alam Khokon directed movie Nishpap Munna, among other movies.To come out from her role as an ‘item girl,’ Bipasha lastly performed as an actress in Zakir Hossain Raju directed movie Poramon where she performed in role of ‘tempered’ wife of Anisur Rahman Milon. Her outstanding acting in this movie has attracted the viewers. She came into limelight as an actress to perform in this movie.This viewers’ choice ‘item girl’ Bipasha has finally selected to perform in three new movies. These are: Mina Films’ Sorry Madam, JAJ Multimedia’s Pothokoli and another movie of Mina Films which title yet not finalised. From February shooting of these movies will start one after another.While talking in this regard Bipasha Kabir told this correspondent, “I started my career in film industry as an ‘Item Girl.’ For this reason, I was appeared on the screen in this role in my acted most of the movies. But I always accept it positively. Now I am going to work as a heroine in several movies. I hope I will perform and represent myself as a quality actress in these new movies.”It may be mentioned that Bipasha Kabir has already finished work of Shahin directed movie Zero Theke Hero. She started her career in media as Lux star in 2009. She firstly performed in a TV play, which was directed by Rumana Rashid Ishita. Bipasha acted other mentionable TV plays are: Irani Biswas directed Tobuo Protikshai, Himu Akram directed Jolchhap and Alvi Ahmed directed play Shomikoron.

Appalling condition: The capital enveloped in dense fog and chilly cold caused disruption in the movement of vehicles on Friday. This photo was taken from Kuril Flyover in morning hours.