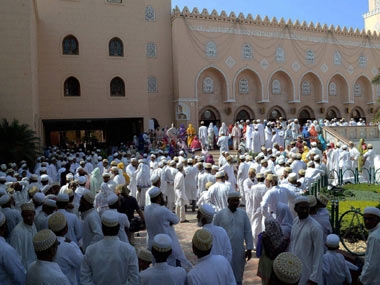 risingbd.com: At least 18 people were killed in a stampede that broke out on early Saturday near the Malabar Hill residence of Dawoodi Bohra spiritual leader Syedna Mohammed Burhanuddin, who died on Friday morning, officials said. (Reports times of India). According to police and BMC disaster control officials, the stampede took place around 1.30 am. Thousands of community mourners converged near Saifee Mahal, where the Syedna`s body was kept for people to pay their last respects. The cause of the sudden stampede is not clear, but officials said at least 17 bodies were taken to Saifee Hospital and one to Cumballa Hill Hospital. At least 20 people, who suffered injuries, were treated and allowed to go, while another three have been admitted for treatment, BMC disaster control said. Syedna Mohammed Burhanuddin, spiritual head of the Dawoodi Bohra community, died following cardiac arrest on Friday, an official said. He was 102 and his funeral is scheduled later on Saturday morning in Bhendi Bazaar, south Mumbai.

M.A. Awal, Narsingdi :Monir Hossain, once a day labourer of Jinardi village under Polash Upazila in Narsingdi district has become self-reliant by setting up a poultry farm with interest free loan from NGO Muslim Aid.It is learnt that Monir Hossain was a day-labourer and used to earn their livelihood by working at brick-kilns. They passed their days with their children with much hardship. Monir Hossain had been in cutest for an opportunity to change her lot. IN 2007, Monir learning...
January 11, 2014

Credibility of testimony depends on judicial evaluation of the totality

Art collector Durjoy Rahman Joy and Jamal Ahmed inaugurating Bronia Cafe and Gallery at Gulshan in the city on Friday.

Speakers at a press conference organized by Sammilito Muktijoddha Samonnoy Parishad in the city on Friday protesting step to cancel marketing of Coca Cola.